The following features and improvements await you in the new version:

With the new version we have the entire layout of Asset.Desk updated and adapted to the Windows 11 styles and optically upgraded. Asset.Desk appears now in the modern Windows 11 UI, as you may already know it from the Microsoft 365 Apps Outlook and Office. The program also offers two special FCS layouts in "Blue Ocean" and "Green Mint" to choose from, each based on the Windows 11 layout. Try it! 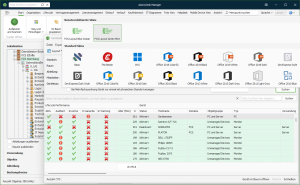 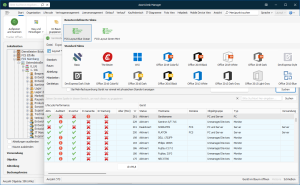 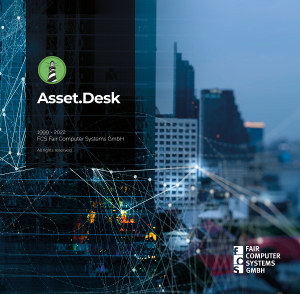 The non-Windows scanners for macOS, Linux and IGEL operating systems have also been updated with the new version. The macOS scanner has been extended to read additional hardware data such as the number of Firestorm and Icestorm cores in the CPU or the number of cores in the graphics card from Apple M1 devices.

Alternatively, all non-Windows scanners can now communicate via WebDAV to receive settings files from a WebDAV server and upload scan files there. Since the WebDAV protocol is based on http(s), it is more flexible and universally applicable.

The import service from Asset.Desk In this case, it can also fetch the scan files from the target directory via WebDAV, save them locally and then import them. Since communication is exclusively via WebDAV, the application server remains for Asset.Desk separated from the WebDAV server, which may be running in a DMZ.

Extended case/chassis info with its own report

The scan of notebooks usually provides more than one case info record, namely one for the laptop case and another for the docking station. So far, in Asset.Desk Manager, only one data record for the housing info can be displayed on the device under System Info. The new version now allows a display of up to three housing info data sets, so that no data set is lost. With the new report "HW housing" the housing/chassis data of all computers can be filtered and listed. This report also provides information, for example, on which laptops are currently docked with which docking stations or are being used.

Good luck and efficient IT asset management with the new version 8.12.4

A detailed description of the new features as well as the past innovations can be found in the changelog in the FCS download area.

You are already an FCS customer and have one Asset.Desk-Support contract?

You don't have a support contract, would like to purchase the new version or have questions?

>> Our Sales team will be happy to advise you!